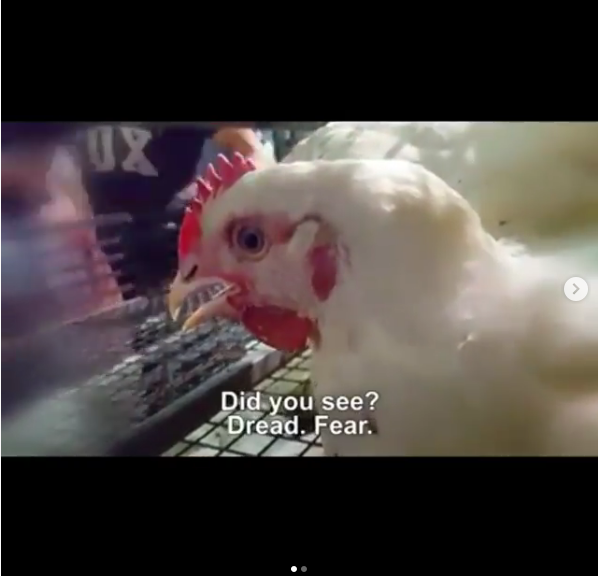 Some facts you may not know:
🐔 Chickens dream
🐥 they communicate vocally with their chicks END_OF_DOCUMENT_TOKEN_TO_BE_REPLACED 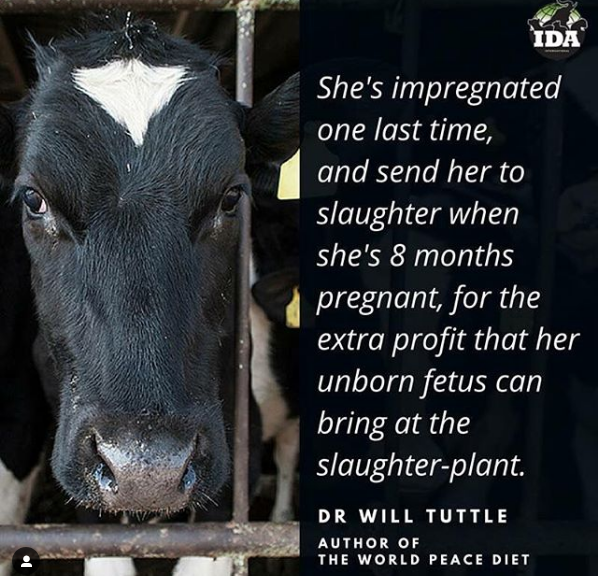 “It is common practice to impregnate her one last time, and send her to slaughter when she is about eight months pregnant or so, for the extra profit that her unborn fetus can bring at the slaughter-plant. So after hanging her upside down and slitting her throat so that she dies by the slow and painful death of being bled out, workers cut her open and perform a late-term abortion, stabbing her unborn calf because of the extra profit this calf brings to the industry in three ways:
END_OF_DOCUMENT_TOKEN_TO_BE_REPLACED 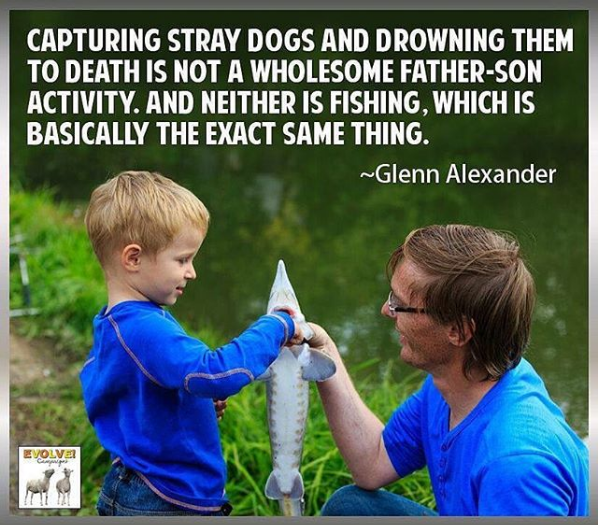 Fishing is hunting. You might think it is a leisure activity, but all you need to do is put yourself in the place of the animal being killed to realize how cruel it is. It is unprovoked murder. Killing animals for food is completely unnecessary.
END_OF_DOCUMENT_TOKEN_TO_BE_REPLACED 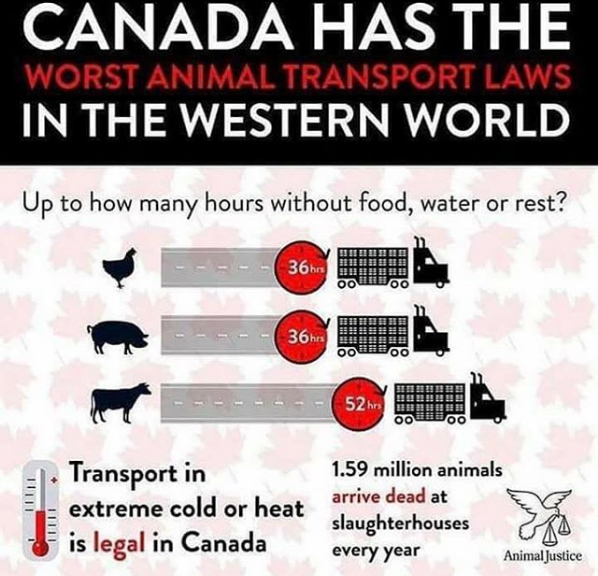 Thousands of farm animals are transported across Canada every week. But the conditions they experience are regulated by rules that are decades old, and inhumane.

Canada’s regulations governing the transportation of farmed animals date back to 1975. They currently allow for animals to be in transit for 52 hours without access to food or water, while the maximum for pigs and chickens is 36 hours. These regulations fall well below the standards of other countries, and are the worst in the Western world.
END_OF_DOCUMENT_TOKEN_TO_BE_REPLACED 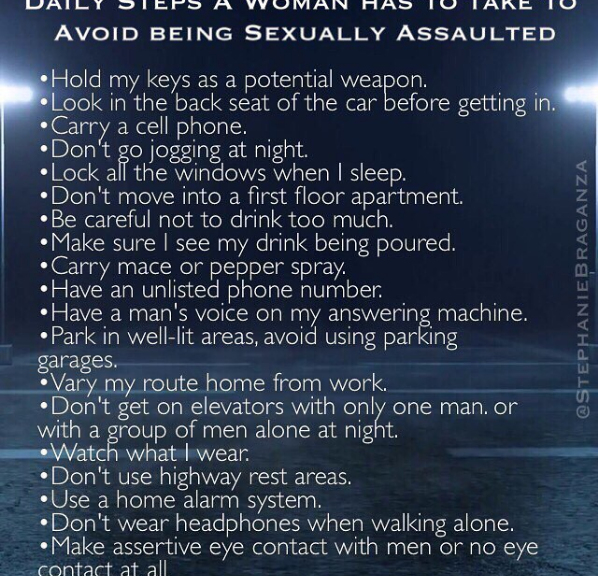 A teacher asks the men in her class, “What steps do you take, on a daily basis, to prevent yourselves from being sexually assaulted?

At first there is a kind of awkward silence as the men try to figure out if they’ve been asked a trick question. Finally, a young guy raised his hand and said, “I stay out of prison.” Which was followed by a moment of laughter, before someone finally raised his hand and soberly stated, “Nothing. I don’t think about it.” Then the teacher asked the women the same question. END_OF_DOCUMENT_TOKEN_TO_BE_REPLACED 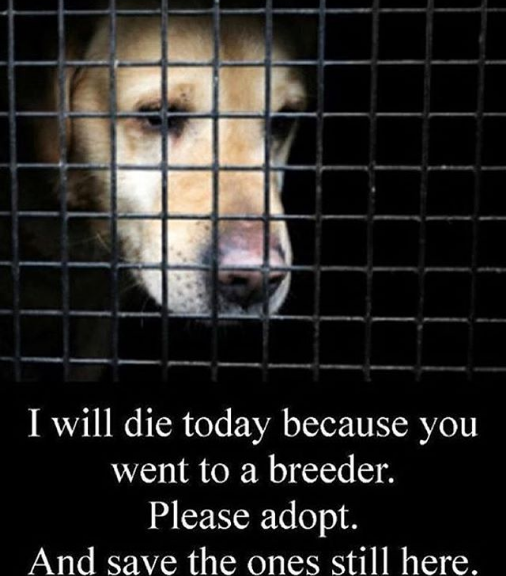 Today is #NationalDogDay! If you’re looking to bring a dog or cat home, please #AdoptDontShop – it’s one of the best things you can do to SAVE LIVES and stop pet overpopulation in North America:

END_OF_DOCUMENT_TOKEN_TO_BE_REPLACED 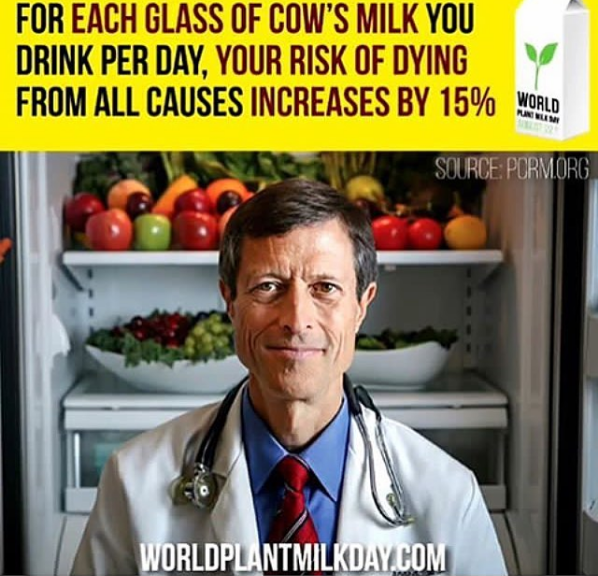 Today is the first annual #WorldPlantMilkDay! Let’s all get behind it and show the world we don’t need dairy! Watch #WhatTheHealth (on Netflix) to find out more about the effect dairy has on yours and your family’s health!
END_OF_DOCUMENT_TOKEN_TO_BE_REPLACED 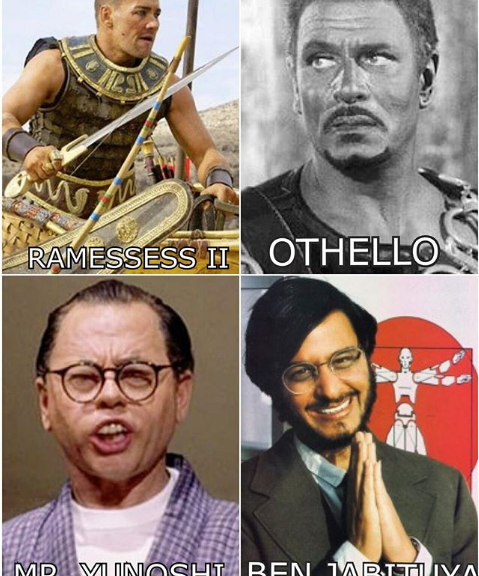 📽 In the movie Short Circuit, Ben Jabituya, an Indian scientist, is portrayed by Fisher Stevens: very much a white man.
📽 Jake Gyllenhaal, a white actor, was cast by Disney (!!!) to portray the lead Persian prince in the action film Prince of Persia by slapping a spray tan on him.
📽 Actress Scarlett Johansson played the clearly Japanese character Motoko Kusanagi in Hollywood’s Ghost in the Shell remake. The movie LOST money at the box office because fans of the series were upset by the whitewashing. END_OF_DOCUMENT_TOKEN_TO_BE_REPLACED 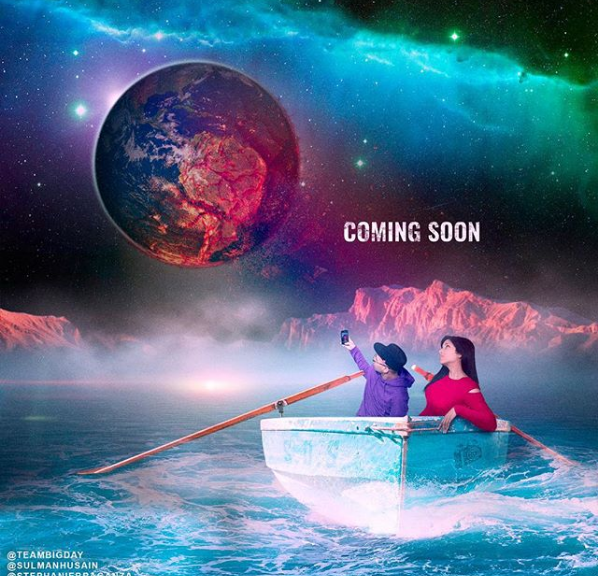 Imagine a future so apocalyptic that earth is uninhabitable by any living being. This is very much the reality of our future.

Today, approximately 1 billion people will participate in Earth Day celebrations, and countless people will plant trees, clean up rivers, pledge not to use plastic bags and decide to walk rather than drive. All of this helps, of course, but it’s not going to save the planet. END_OF_DOCUMENT_TOKEN_TO_BE_REPLACED 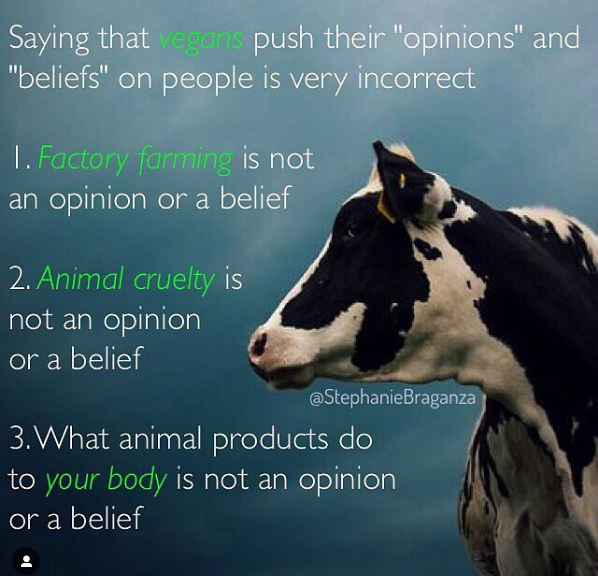 “It is only by softening and disguising dead flesh by culinary preparation, that it is rendered susceptible of mastication or digestion; and that the sight of its bloody juices and raw horror, does not excite intolerable loathing and disgust. END_OF_DOCUMENT_TOKEN_TO_BE_REPLACED 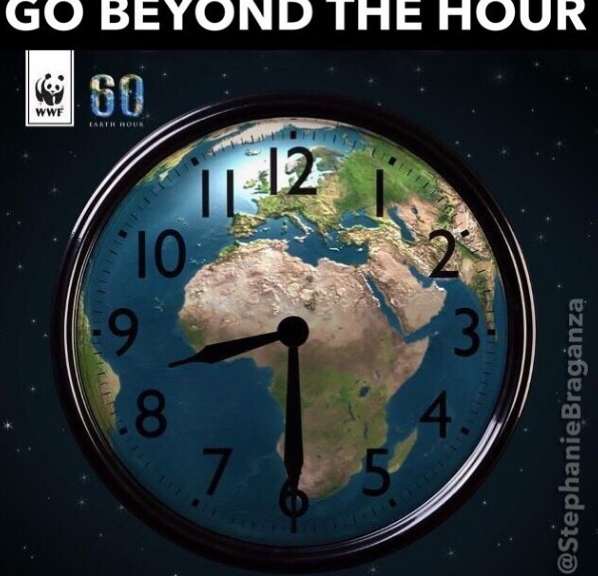 Tonight, many of us will be turning off our lights at 8:30pm for Earth Hour. While this will make for a nice romantic meal, if you truly want to combat climate change, cross off meat, eggs and dairy foods from your shopping list. The reality is: you cannot be an environmentalist and eat animal products. END_OF_DOCUMENT_TOKEN_TO_BE_REPLACED 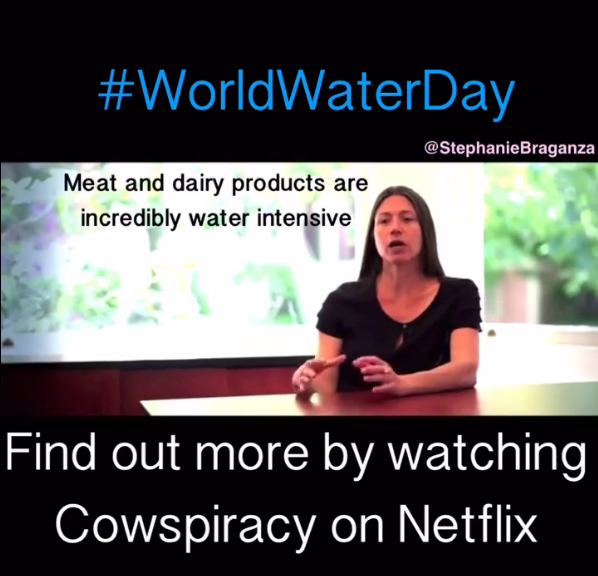 World Water Day, on March 22 every year, is about taking action to tackle the water crisis. So what can you do?

Not showering for 3 months saves the same amount of water as not eating ONE burger made from animals! So which is easier and more practical? By going vegan, one person can save approximately 219,000 gallons of water a year.

The very fact that animals raised for food are alive means they are going to consume water, either directly or through their food. Think about how much you eat and then think about a cow’s appetite. They eat a lot – and people eat a lot of animals! It takes an enormous amount of water to grow crops for animals to eat, clean filthy factory farms, and give animals water to drink. 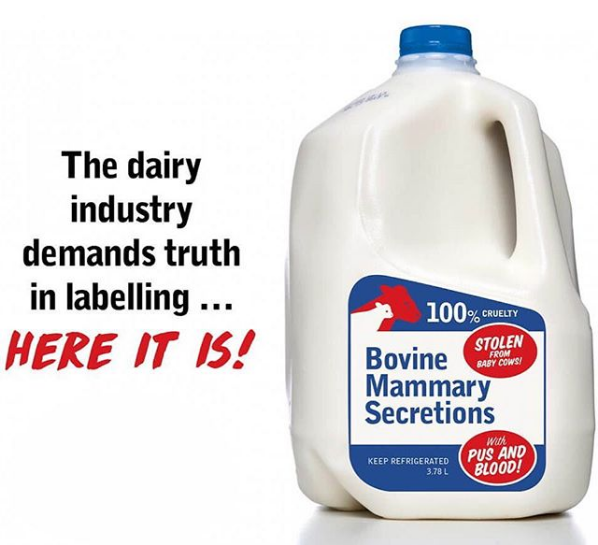 We all know that the dairy industry is in deep crisis (notice all the dairy ads lately?), but now we’re witnessing signs of panic: they’re trying to ban the word “milk” from soymilk, almond milk, rice milk, oat milk, and any other non-dairy milk. END_OF_DOCUMENT_TOKEN_TO_BE_REPLACED 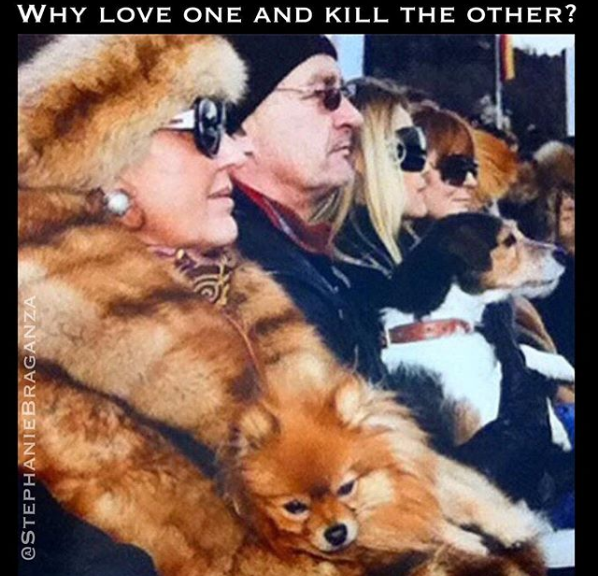 The disconnect this woman has between wearing fox fur and holding a Pomeranian dog is atrocious and disgusting, isn’t it? Who is ignorant enough to not make the connection between the canine she is wearing and the canine she loves? END_OF_DOCUMENT_TOKEN_TO_BE_REPLACED 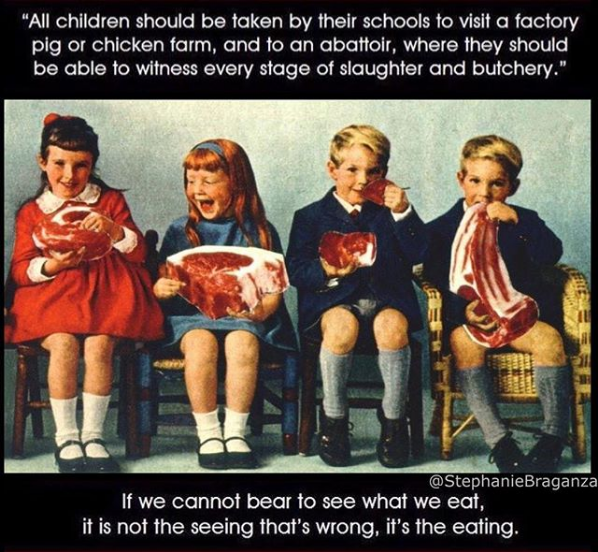 Kids play violent video games, watch violent movies, and engage in mock battle… Why can’t they handle how most animals are killed for food?

In an era where kids are inundated with factory-farming propaganda from powerful groups like the dairy industry in schools and agribusiness lobbies at state fairs, our best defence is education. If we want to raise food-literate children, if we want them to think critically, to challenge the status quo — to make good choices when we can’t choose for them — parents have a responsibility to tell the truth so others don’t co-opt them with fiction.

How do you do that? For starters, picture books for children can go a long way. Check out Ruby Roth’s “#ThatsWhyWeDontEatAnimals,” and “Louise, the Adventures of a Chicken,” by Kate DiCamillo and Harry Bliss. Michael Pollan has a young readers edition of “The Omnivore’s Dilemma,” and Eric Schlosser has a kids’ version of “Fast Food Nation” called “Chew on This.”

The Meatrix Trilogy cartoons borrow from “The Matrix” to take on factory-farmed meat, eggs and dairy, and the fast-food industry. It’s animation with some serious ammunition. The site also includes presentation kits, handouts and other resources for kids to check out on their own.

All kids naturally love animals, I think, but explicitly cultivating that love early on by exposing them to what many would consider “food animals,” by using positive language, and by helping them look at animals not as lower beings to be dominated but as peers worthy of equal treatment and consideration – that love won’t die once they get older and more hardened to the realities of the world.