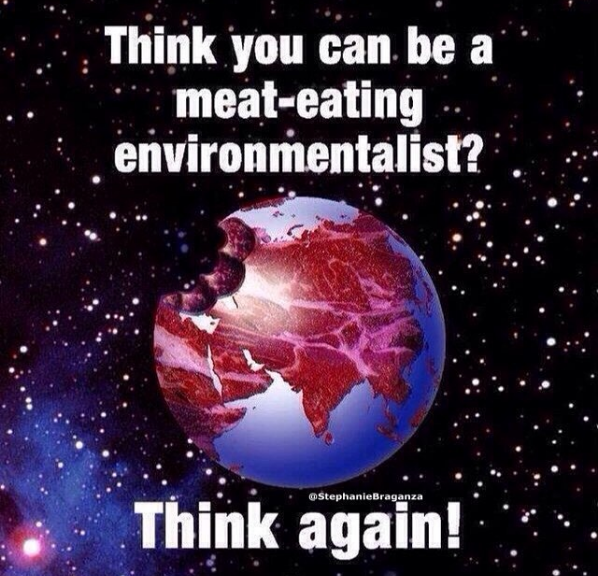 Every day we hear about the dangers of climate change. But what if there were just ONE thing we could all do to help stop it?

1. The world’s cattle alone consume a quantity of food equal to the needs of 8.7 billion people, more than the entire current human population of the Earth. If we ate the grain ourselves instead of funnelling it through animals on farms first, there would be more than enough to end world hunger.

2. Someone with a vegan lifestyle produces about 50% less carbon dioxide than a meat-eater, uses an 11th of the oil, 1/13th of the water and 1/18th of the land.

3. Meat consumption is one of the leading causes of modern species extinctions. Land is cleared for animals to graze or to grow feed for them – wildlife is losing out.

4. Animal Agriculture is responsible for up to 91% of the destruction of the Amazon rainforest. You can save our vanishing landscapes by leaving animal products off your plate!

5. Cows produce 150 billion gallons of methane a day. If methane is allowed to leak into the air, it absorbs the sun’s heat, warming the atmosphere. Thus, it’s considered a greenhouse gas like carbon dioxide (but is 84x more potent)! 6. Emissions for agriculture are projected to increase 80% by 2050. If we don’t act now these problems will get worse

7. Animal products cause 27% of our water footprint – that’s 76 gallons a year per person… Yet around 1.2 billion people – almost 20% of the world’s population – face water shortages.

9. Livestock cover one third of the Earth’s ice-free land. Going vegan could literally change the face of our planet.

11. For every 1kg of fish caught, up to 5kg of unintended marine animals are also caught and then discarded as by-catch. Dolphins, sharks and turtles are among the “accidental” victims.