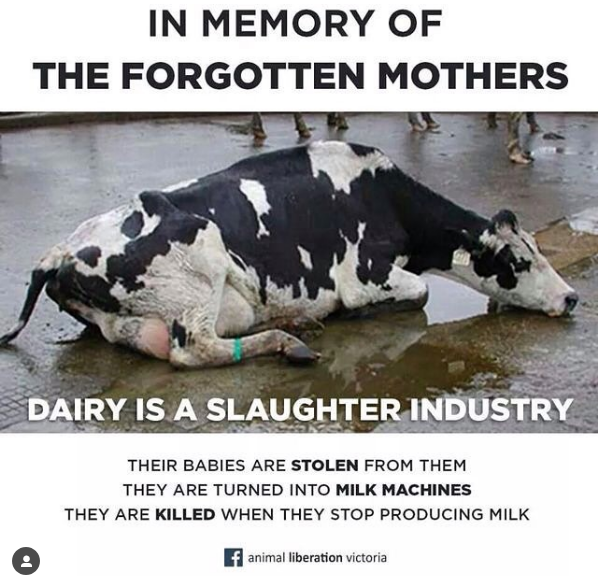 Milk comes from a grieving mother.

A cow needs to be pregnant in order to start producing milk.

Cows are forcibly impregnated OVER AND OVER using invasive, nonconsensual rectal and vaginal penetration (raped) by farmers, this is standard practice.

Babies are typically taken from their mother cow immediately or shortly after birth. Mothers mourn for their young and can be heard calling for their calves for days.

Frightened, sick and alone, males will be sent to veal operations or auctions to be killed. Male calves—seen as “byproducts” of the dairy industry—are generally taken from their mothers when they’re less than a day old. Many are shipped off to barren, filthy feedlots to await slaughter. Others are kept in cramped pens or tiny crates, where they’re prevented from moving much so that their flesh will stay tender.

Females will typically go onto meet the same fate as their mother’s and be fed milk replacer instead of Mother’s milk.

A cow’s natural lifespan is about 20 years, but cows used by the dairy industry are typically killed after about five years because their bodies wear out from constantly being pregnant or lactating.

Think about this… The purpose of cow’s milk is to turn a 65lb calf into a 400lb cow as rapidly as possible. Cow’s milk is baby calf growth fluid. Everything in that white liquid: the hormones, lipids, proteins, sodium, growth factors… Every one of those is meant to grow that calf into a big fat cow.

Whether you pour that liquid on your cereal, whether you clot it into yogurt, whether you ferment it into cheese, whether you freeze it into ice cream… IT’S BABY CALF GROWTH FLUID. Women eat it and it stimulates their tissues and gives women breast lumps, it makes the uterus big and gives them fibroids and they bleed and need hysterectomies. It gives guys man-boobs… Cow’s milk is the lactatious secretions of a large bovine mammal who just had a baby. If you’re not a baby calf, don’t have baby calf growth fluid! – DR. MICHAEL KLAPER