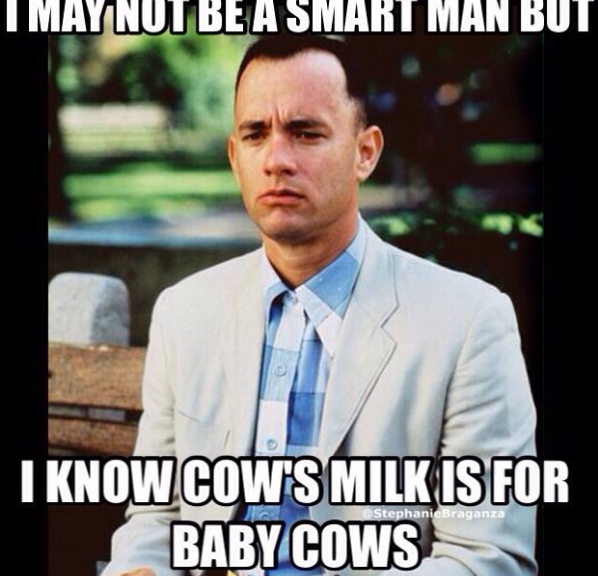 There’s been a sharp increase in widespread anti-vegan sentiment online lately (ex: @ibnicolearbour). Veganism has exploded into the mainstream this year, therefore the inevitable cognitive dissonance-induced vegan backlash that has always been brewing under the surface is now occurring in full force.

People try to mock vegans because they don’t like to be reminded of the harm they do to animals.” -Dr. Casey Taft (domestic violence psychologist). It’s the same strategy that’s been used to counter every social justice movement – propagating negative stereotypes in an attempt to try to silence people.

As one example of many, our Earth is currently in the middle of its sixth mass extinction, and scientific research shows that meat production is likely the leading cause of modern species extinctions.

Dear vegans, shut up” really means, “Dear veganism, go away. I don’t want to change. I’m scared to change. You can’t make me learn about this if I don’t want to know.” No matter how much we try to absolve ourselves of responsibility, we continue to use embarrassing amounts of the planet’s scarce natural resources, much of which are turned into waste, to feed selectively-bred animals – each of whom enters a slaughterhouse as a very young, sensitive creature, coming out chopped into bits.

The truth is that carnism is what’s actually been dishonestly forced down our throats since childhood, because it requires the most resources, thus results in the most profit. We could eat plants instead of eating the animals that eat the plants, thus removing the totally inefficient “middleman”. When we hear “humane slaughter” we don’t ask what that entails. Normal people don’t Google this, right?

Veganism is realizing there’s a better, more logical way on all counts, despite how badly society wants maintain the harmful status quo. This transition opens our lives up in ways we never imagined.

If people can create, like or share anti-vegan videos, memes, and articles, or even just trivialize or dismiss the idea offhandedly – all while expecting vegans to laugh with them – they should be able to coherently answer questions like the following:

1) Which innocent and vulnerable animals should we protect and which should we intentionally and avoidably harm against their will?
2)What is the right method to kill a day-old fluffy yellow chick who was born the wrong gender so won’t lay eggs?
3)How should hens and cows who have had their female reproductive systems aggressively manipulated for their lactations, resulting in prematurely exhausted bodies, be killed?
4)When should a newborn calf or baby goat, often with umbilical cord still attached, be separated from his or her highly maternal mama so people can take her milk for themselves?
5)Why should a healthy animal forced into the world by humans, and who is barely in the prime of his or her life, then be forced against their will by humans to leave this world?
6)How should the people tasked with killing hundreds of animals an hour deal with the trauma of constantly doing so day in and day out?

Remember, the above is done to accommodate a socially-accepted human vice, not a vital human need. Do the research for yourself. Push beyond the first answers you get. Push yourself to learn about things you really don’t want to. Read a book, watch a documentary, read articles about this. Fact-check everything.